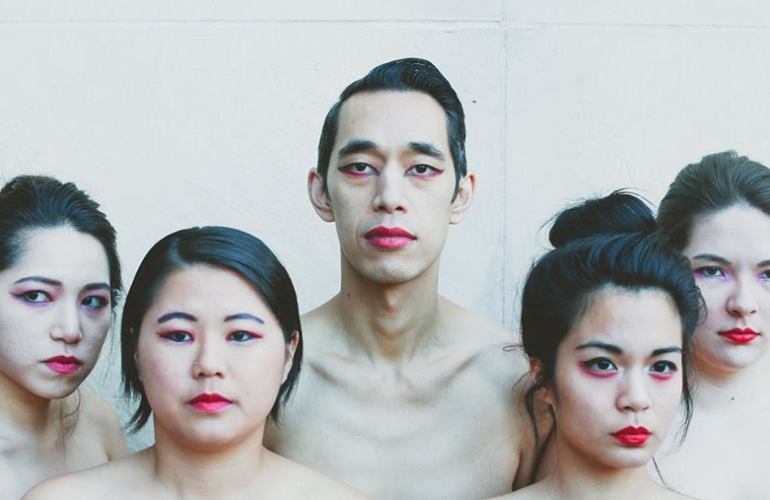 Annie Kim Hedrick emerges from the velvet twilight draped across the low sky of Bastrop, Texas. Determination creases her normally smooth face. She strides unobstructed through a crowd that is scrambling around the rain-soaked campground as thunder rumbles in the distance.

Annie heads toward a group of chaperones, all women, huddled together in the middle of the flooded KOA campsite. I stand among them and before my mind registers her presence on the edge of the campsite, Annie is already standing next to our shivering frames. She does not know it yet—neither do the rest of us—but she is steamrolling her way to becoming iconic.

The word “iconic” is often overused, (mis)spoken to elevate meaningless behaviors and anomalous entities that temporarily capture our attention—a lipstick, a store, a fauxlebrity, a popular TV show that is the poorly remade cousin of a older but better constructed one. In the following days—and years—to come, these other women and I will recap the evening so frequently that Annie’s subsequent actions will become a valued teaching reference for future volunteers to the program.

“We heard the girls don’t want you in their tent,” one of the chaperones says as Annie presses closer to us for warmth. About 20 girls attend this field trip, but we all know which ones she is referring to.

Each one of us has been assigned two or three students to bunk with overnight, making sure they are safe and, if possible, forming a mentor relationship in the process. Adult men will supervise the boys; women will monitor the girls. This distribution is further apportioned between middle school and high school students. Annie has been given the shortest straw—four contemptuous high school girls who are attempting to upend the conviviality of the campsite and isolate themselves from authority.

“We don’t want her in our tent,” the girls groused earlier. “We don’t like her.” They avoid all subsequent contact with Annie and deaden their ears to other adults who attempt to reason with them. It is nearly impossible not to liken them to the “Plastics” in Mean Girls.

What cuts deeper, though, is this particular chaperone’s statement. It is not meant to convey knowledge but to intone Annie’s social position and the unspoken chasm that lies between her and “us”—we are the seasoned leaders, accepted by most of the students in the youth group. She is the novice who must prove her worth to them and to us. One does not have to undergo mental gymnastics to understand how the girls learned the fine mechanics of ostracization.

Annie’s voice slices through the thickening air so sharply that she stuns us all.

“They don’t have to like me, but I’m going in there anyway.”

She gathers her backpack and sleeping bag and heads toward an imposing tent at the campsite’s entrance. It is bursting with laughter and dotted with the familiar light of smartphone screens. She enters the tent and zippers the flap behind her with a brisk “hello.” There is an abrupt silence.

“Oh, Jesus. Help her,” I mumble then hold my breath.

I met Annie six-months prior this trip at a personal development seminar designed to help us discover how to merge our spiritual gifts with our life’s purpose and career. My husband and I grew to enjoy her and her husband’s company. I loved the way she encompassed a space with enthusiasm and effusive good cheer. I respected the way she lived her life in full color, wearing clothes that reflected her mood and spirit—whether that was conveyed in sweatpants or cosplay.

I admired her the moment she marched headlong into adversity in the sodden darkness.

For Langston: What inspired you to be an actress?

Annie Kim Hedrick: When I first started as a teen, I was inspired by being able to become someone different than myself and taking on that character’s persona.

FL: How does your Asian American heritage play a role in your acting? Does it influence the roles you take?

AKH: Theatre in general tends to exclude stories about people of color. Asian Americans are almost invisible, so, many characters get whitewashed in the media. There are token, stereotypical characters, and I’ve played those roles in the past, but I’ve also played many non-specific roles with directors that would “color blind” [casting].

Since working with The VORTEX Rep Theatre, I’ve been able to have more say in the roles that I’ve played. The VORTEX does a number of devised and original work, and as a company member, I’ve really found a home where I can build my own characters with their own unique story.

FL: What inspired you to participate in Mikado?

AKH: Most productions of Gilbert and Sullivan’s Mikado are whitewashed—white actors playing Japanese characters—but Mikado is problematic in a lot of ways. Gilbert and Sullivan wanted to satirize things going on in Britain by using a Japanese cover. It’s really culturally insensitive in today’s time, and there’s nonsensical lyrics that are supposed to imitate the Japanese language. The characters have names like “Yum Yum” and “Titti Sing,” which are also nonsense names. It’s just tacky that it still gets produced with white actors doing yellow face.

I was in a really fortunate position, a director recommended me to kt shorb, who was directing Mikado: Reclaimed. The play used Gilbert and Sullivan’s music, the setting was a futuristic internment camp, and the cast consisted of five Asian American actors and one Middle Eastern American actor. In our production, we were all prisoners who were being watched and forced to perform for an unseen audience—much like the Japanese internment propaganda that was made in the 1940s.

We established early on that the use of English speech was prohibited, and speech in general was dangerous. So, other than the few tidbits of Asian languages in our show, the main way that the prisoners could express themselves was through the vehicle of the oppressive music. I really loved the idea of flipping this musical and using it to bring visibility to the Asian actors that it attempts to portray.

FL: It seems like there has been an uptick in Hollywood whitewashing Asian characters in movie adaptations. There’s Major in Ghost in the Shell, the Ancient One in Doctor Strange, Major Ben Daimio in Hellboy…how do you challenge this act of erasure through your involvement in the arts?

AKH: I have not been using social media as a platform for social justice, but I am very supportive of artists who do. I just can’t engage in it without getting into a fight. I am just not capable of being empathetic to people who think whitewashing is okay. Mostly, I’ve been sharing my own stories that dealt with whitewashing. I’ve been writing plays, supporting projects, performing, and directing productions that bring visibility to Asian actors. I have also recently begun to note some of the production companies that are very diverse, and I’ve uplifted and promoted their work through word of mouth.

FL: Tell me about your experience learning Bunraku and Kabuki.

AKH: With Kabuki, it was pretty incredible seeing the difference of discipline, and the stylization. But I was most excited about Bunraku. I have always been super interested in puppetry, so the Bunraku plays were so great to watch. I cried through most of them just because the artistry was so beautiful. I think acting with your own body is a great accomplishment, but it’s even more awesome to see an artist bring an object to life with voice and movement.

I would have loved to been able to participate, but the discipline requires two years of study before you can handle these puppets, and it is a male-dominated art form. The closest I’ve come to puppeteering in Bunraku-style was in a show called Atlantis (Ethos Productions at the VORTEX).

FL: Can you talk a little bit about your role on the awards council?

FL: What projects are you currently working on?

AKH: I am directing for a project called P3M5, which stands for the Plurality of Privacy Plays in 5 Minutes. It’s basically a 5-minute play festival with the focus on the value of privacy and privacy rights

I’m directing two pieces that feature actors of color. One piece takes place at the Rohwer Arkansas [Japanese internment] camp, and compares privacy in the lives of two teens in the 1940s versus 2017.

Rob and I are writing a play that is very loosely based on our own experiences from our first year of marriage. It focuses on an interracial couple who move into a new place together with their baggage, a literal embodiment of misunderstanding.

FL: What can we expect from you in the future?

AKH: More writing. If I want to see more stories with people of color, then the only way for them to be authentic is if people of color like me are writing them. I hope there will be more directing and casting choices for me so that I can feature people who are diverse… and I want to continue working on and building puppets as well!

AKH: Stories that cut to the heart. Making something that can unite people and lots of cuddle time with my cats and dog.

FL: Okay, ideally, what would you like to do? Would you own a production company, would you be a famous actress? Would you live in an idyllic countryside as a recluse?

AKH: I would love to change the world and make it a little better than it was. I’ve always wanted to write something or a lot of things that would gain success on a national level. Maybe a play, maybe a book. I think if I owned a production company, it would be academic, kids learning the trades of theatre—playwriting, acting, directing, tech, design.

For a long time Rob and I have been trying to minimize on the stuff we have and the space we take up, and the need of sustainable living has been weighing heavily on me.  Maybe a commune type situation that isn’t too hippy-dippy cultish would be ideal.

Annie Kim Hedrick is a fearless actress and self-proclaimed social justice warrior based in Austin. She gets along quite well with teenage girls. She one day hopes to focus on projects that represent and unite the community. Check out her site, 100 Ways,or a few old tweets.

This site uses Akismet to reduce spam. Learn how your comment data is processed.

The April bouquet is here 😍
This summer, I'll be working on my most ambitious project yet through a fellowship with @writerscolonydairyhollow. I set out to get this fellowship and I got it. The project (that I proposed) is different for me and beyond my current capabilities, but that's how it should be. I can't wait to see what I create.
You ever see a trailer for a tv show and instantly know it's based on a book? A while back, I saw the trailer for Shadow & Bone on Netflix and just knew, so I looked it up and requested the book at the library. I didn't expect to demolish it in one evening. SHADOW & BONE by Leigh Bardugo was a nice distraction from the world for a minute. And it was nice to read about love and pining that builds and makes sense and is supported by character history and lore elements and not just a thing that's forced for the narrative. I can't wait to watch the show. I'll probably binge that too.
Oprah may be the queen of cabbages, but I'm the queen of chard 😁 I can't wait to harvest this (tomorrow!) for a spring soup.
As I reboot my reading habits, there's only one book for my April TBR:
Today I have a flash essay out in Hobart's companion journal, HAD. It's a lil different than my usual. Proud of this one. Link in bio.
Loading Comments...
Comment
×
<span>%d</span> bloggers like this: